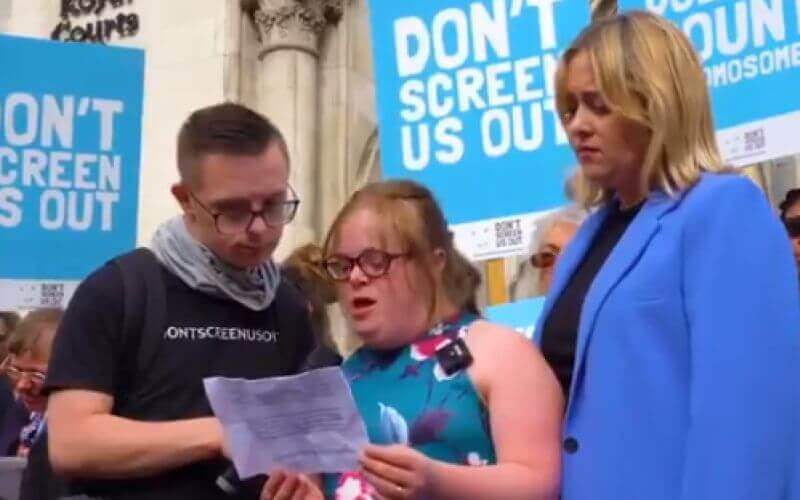 Disabled campaigners have given contrasting responses to a court’s high-profile ruling on whether abortion laws are discriminatory.

The high court dismissed a legal challenge that argued that it was “morally and ethically wrong” and discriminatory to allow disabled fetuses to be aborted up until the moment of birth.

The case has been spearheaded by Heidi Crowter, from Coventry, who has Down’s syndrome, and brought the case against the Department of Health and Social Care.

She was asking the high court to rule that allowing a fetus with Down’s syndrome to be aborted after the 24-week limit for non-disabled fetuses – under the 1967 Abortion Act – is incompatible with the European Convention on Human Rights.

The law allows an abortion after 24 weeks if there is a “substantial risk” that if the child was born it would be “seriously handicapped”.

Crowter (pictured, centre) also wanted the court to declare that Down’s syndrome and other non-fatal impairments should not be considered a “serious handicap” under the act.

She was joined in the legal action by Máire Lea-Wilson, from Brentford, west London, and her two-year-old son Aidan, who has Down’s syndrome.

They had told the court that the UN’s committee on the rights of persons with disabilities called on the UK government four years ago to change its abortion law, arguing that it was “concerned about perceptions in society that stigmatize persons with disabilities as living a life of less value than that of others and about the termination of pregnancy at any stage on the basis of fetal impairment”.

They had also pointed to a report by the UN’s special rapporteur on the rights of persons with disabilities, who said in December 2019 that such abortion policies “aggravate” the message that disabled people “ought not to have been born”.

But the court ruled (PDF) last Thursday (23 September) that the law as it stands does not breach the European convention.

It also dismissed the attempt to persuade the court to declare that Down’s syndrome and other non-fatal impairments should not be considered a “serious handicap” under the act.

Lord Justice Singh and Mrs Justice Lieven said in their judgement that it was not clear what would happen if such abortions were to be outlawed, if “some women have been compelled by the fear of the criminal law to give birth to children who will not be loved or wanted”.

They added: “This is just one example of the intensely difficult issues which are better debated in Parliament, which can take account of different interests and viewpoints, rather than in litigation.”

Some disabled activists criticised the court’s decision, but others welcomed the judgement and warned that the legal action had risked harming women’s abortion rights.

Crowter and Lea-Wilson say that they will seek permission to take their case to the court of appeal.

They have a crowdfunding page to raise funds for the legal action, and they have so far raised more than £120,000.

In a statement, Crowter said: “I am really upset not to win but the fight is not over.

“We face discrimination every day in schools, in the workplace and in society.

“And now thanks to this verdict the judges have upheld discrimination in the womb too. This is a very sad day, but I will keep fighting.”

Disabled campaigner Simone Aspis, director of consultancy Changing Perspectives, said the judgement was “very disappointing” and “sends a very powerful message that disabled people’s lives are of less value and that we should not be afforded the same rights as others in society”.

She said: “Whatever the laws are, if they embrace disability discrimination then the provisions must be challenged.

She added: “Heidi’s continuing fight to get the law changed so that disabled and non-disabled unborn babies have equal right to life whilst maintaining the woman’s right to have an abortion must be supported.

“In addition, pre-natal testing must be provided in a manner that does not promote disability discrimination.”

In a sign of the sensitivity and complexity of the issues involved in the case, and how the law as it stands pits those defending women’s rights against those campaigning for disability rights, the disabled women’s collective Sisters of Frida has not been able to comment on the high court judgement this week.

It said that it would be discussing reproductive justice soon, and a spokesperson added: “We have not had the capacity to comment as a collective with an intersectional perspective – we need a fuller discussion with more disabled women.”

Greater Manchester Coalition of Disabled People (GMCDP) praised Crowter for her “powerful activism” and for raising awareness “about the real lives of people of all ages with Down’s syndrome, to counteract the deep prejudice society holds”.

But GMCDP said it believed the high court’s ruling was the right one.

Dennis Queen, a spokesperson for GMCDP, said: “We think it’s the correct ruling, because we think the case could impinge on women’s rights.

“We would suggest ways forward that uphold women’s rights and disability rights instead.”

In its statement, GMCDP said that testing for Down’s syndrome and spina bifida in pregnancy “has become standardised in the UK”.

It added: “This does lead to discrimination: in available termination dates; against disabled parents and parents-to-be; and against people who are expected to birth a child with impairment/s.

“The coalition think that challenging abortion law is not the best way forward, as this could undermine rights.

“Genetic screening, and how things proceed following diagnosis, are the key discriminations here.

“The coalition thinks there are other ways to move towards reducing or removing this discrimination and we are working on a position statement on reproductive rights that we hope to release soon.

“The coalition hopes our position statement will speak strongly for the rights of women and others who are pregnant, for disabled parents and parents to be, and for people who are expected to birth a child with impairment/s.”

Another disabled woman to speak out was author and journalist Dr Frances Ryan.

She said on Twitter: “Those wishing to shrink term limits would have you believe swathes of women are having late term abortions, thoughtlessly.

“Here’s reality: a tiny number sadly rely on them, typically because they’ve had to wait for medical diagnosis post-20 weeks.

“No woman wants a late term abortion. But it exists [because] medical conditions, largely fatal ones, don’t show until post-20 [weeks] and women need time to have further tests and mourn.

And Professor Tom Shakespeare, a leading disabled academic and co-director of the International Centre for Evidence in Disability at the London School of Hygiene and Tropical Medicine, said he was “glad” the high court had rejected the case.

He said on Twitter: “In 2020, there were 229 abortions on disability grounds after 24 weeks. Only 14 involved Down syndrome.

“The majority entailed complex anomalies, many of which were incompatible with life. While sad, this is a humane approach.

“I do not think the answer to disability oppression is to make abortion harder to access.”