You are here: Home / Benefits and Poverty / Outrage of trio of bereaved relatives as Coffey is elevated to deputy prime minister 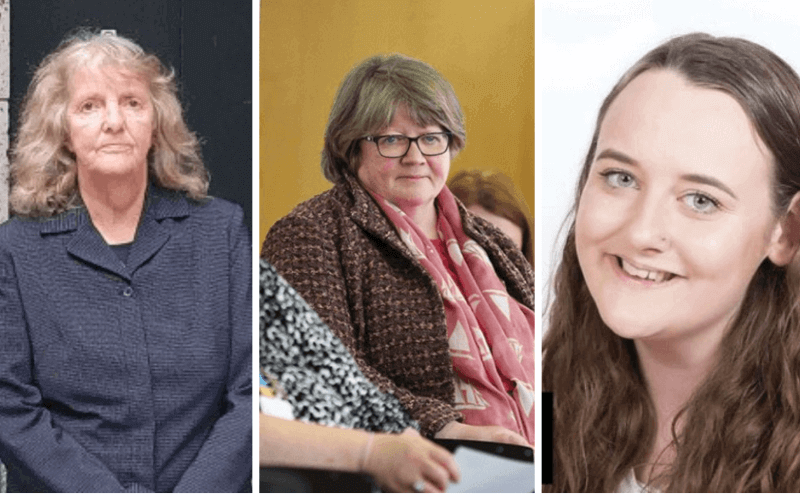 Three disabled women who lost relatives because of Department for Work and Pensions (DWP) failings have expressed their shock and anger at the appointment of Therese Coffey as the new deputy prime minister.

Coffey, who was also appointed health and social care secretary, had been work and pensions secretary for almost exactly three years.

She has been replaced by Chloe Smith, who was minister for disabled people until this week and has been another high-profile supporter of the new prime minister, Liz Truss.

During her time as work and pensions secretary, Coffey was repeatedly criticised for her attitude to the families of benefit claimants whose deaths have been linked to her department, including refusing to meet the families to discuss their concerns.

She was also criticised for preventing the release of key details from scores of secret reports into claimant deaths.

And there has been repeated anger over her claims that her department has no statutory duty of care to benefit claimants, including those whose deaths have been caused by her department.

Today, in the week that Coffey was appointed deputy prime minister, Disability News Service has published details of the latest death of a claimant to be linked to her department’s continued failings.

The body of Sophia Yuferev was found in her flat months after all her benefits had been removed, but DNS reveals this week how she had been hounded for years by DWP (see separate story).

Public criticism of Coffey’s attitude to disabled people does not end with her failure to prevent the deaths of claimants.

She has been heavily criticised for hiding numerous DWP reports, and earlier this year MPs had to use their parliamentary powers to force the publication of a watered-down DWP report that found disabled benefit claimants had widespread “unmet needs”, and which Coffey had refused to release.

At last year’s Conservative party conference, she strongly signalled that DWP would launch a new bid to try to push more disabled people with high support needs into work, and would cut spending on disability benefits.

She even failed to sign up to her own much-criticised disability employment scheme, Disability Confident.

She also presided over the failure to offer recipients of so-called legacy benefits the same £20-a-week benefit increase given to those on universal credit.

This week, three disabled women who lost relatives because of DWP failings – Alison Burton, Imogen Day and Joy Dove – have each expressed alarm and shock at Coffey’s appointment as both deputy prime minister and health and social care secretary.

Alison Burton is the daughter-in-law of Errol Graham, who starved to death after DWP wrongly stopped his employment and support allowance, leaving him without any income.

She said Coffey’s appointment was “outrageous” and “disgusting”.

She highlighted Coffey’s repeated failure to show sympathy for the families of those who had died, and her lack of action to address DWP’s part in those deaths.

She said: “You need someone [as work and pensions secretary] who is willing to listen, whether changes were possible or not.

“If she did, she would have made an effort to meet the families, because that is the least her department owed us, to at least listen to what the families had to say.”

She said Coffey’s failure to listen and learn from her department’s mistakes had put other lives at risk.

She said: “You have to learn from mistakes that have been made. She’s not willing to do that.

“If she takes the same attitude [in her new job] she is going to destroy the NHS as well.”

Joy Dove’s daughter, Jodey Whiting, took her own life in February 2017, 15 days after she had her ESA wrongly stopped for missing a work capability assessment.

She said she was “disgusted” at Coffey’s appointment as deputy prime minister, and was another to point out how she had refused to meet the families of those who had died and discuss their call for a public inquiry into the deaths.

“I would love to meet her and say this to her face, but I think she’s a coward. She has no heart.

“I think the government will come crashing down if ever – God forbid – she’s in charge of the country.

“She has said that Jodey’s death was just a one-off, a slight hiccup, and that DWP was not responsible, despite all the deaths over the last 10 years. She knows this is not true.

“Now we are fighting back.”

Imogen Day is the sister of Philippa Day. An inquest in January 2021 uncovered 28 separate problems with the personal independence payment system that helped cause Philippa’s death in October 2019.

She said she was “disappointed” that Coffey had been appointed as deputy prime minister.

She said: “She has repeatedly refused to listen to the lived experience of bereaved families who lost their disabled family members due to issues with their benefits.

“We have been asking both personally and professionally to meet with her to discuss our concerns and offer insight. These requests have been ignored and denied.”

She said this “speaks volumes” about who Liz Truss is willing to trust as her deputy.

She added: “The pain of losing a family member due to errors of government departments is unimaginable and yet rather than grieve we have had to collectively campaign for change, and we see no end in sight to that, due to her refusal to act.”

Truss remained silent on disability policy during her leadership campaign, refusing to answer questions from Disability News Service or even from the Conservative Disability Group.

It is not yet clear who she will appoint as her new ministers for disabled people and for social care, although Gillian Keegan was still being described as the care minister on the DHSC website at noon today (Thursday).

The DWP website does not currently list a minister for disabled people, although former Department for Environment, Food and Rural Affairs minister Victoria Prentis has been appointed as a new DWP minister of state.

A DWP spokesperson declined to provide any information about the disability role this morning.