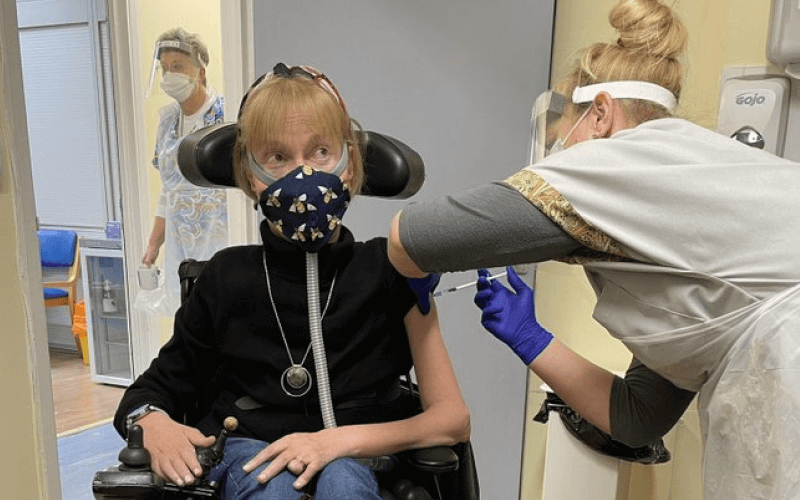 A disabled peer is calling on other disabled people seen as clinically extremely vulnerable (CEV) to coronavirus to “be proactive” and ask their GPs to vaccinate them and their personal assistants, following the publication of new government guidance.

The advice from the crossbench peer and campaigner Baroness [Jane] Campbell, who has spent months shielding during the pandemic because she has spinal muscular atrophy, came after the new government guidance helped persuade her GP to vaccinate her, her partner and four personal assistants (PAs).

But she has called for further clarification on how other disabled people in her situation can secure a vaccination as soon as possible, as the government pushes ahead with “the biggest vaccination programme in NHS history”.

Baroness Campbell had been pushing the government in the House of Lords and through letters to change its guidance to ensure that PAs are included in the second highest priority group for vaccination, along with other social care workers.

This week, the new guidance stated that it was “vital that we identify and reach directly employed Personal Assistants, who support people within any of the JCVI* priority groups (the clinically vulnerable and adults) as part of our efforts to ensure full coverage of the priority 2 cohort”.

The government has promised to offer a first vaccine dose to everyone in the top four priority groups – including all those in the CEV group – by 15 February.

Baroness Campbell’s concerns about the lack of clarity were mirrored by disabled campaigner Fleur Perry, who is also in the CEV group and has been shielding since the start of the pandemic.

She welcomed the new guidance, but she said: “What I’m hearing from some disabled people is that not all local authorities seem to be aware that they are expected to take a lead role in identifying social care staff [who should receive the vaccine as a priority].

“This means that some people employing PAs through direct payments or personal health budgets are being bounced between GP, clinical commissioning group, and council, with no organisation taking responsibility for getting this done.

“This is resulting in disabled people and their PAs being left behind, extending the length of time they are at preventable risk of infection.

“Quite frankly, I don’t want to lose a friend this year due to a council not writing a list.”

Baroness Campbell had previously been told by her GP that he was waiting for government guidance on where she and her PAs should come in the vaccine queue.

She immediately emailed him this week with the new guidance, “quoting significant paragraphs and asked very politely whether he would now consider vaccinating me, my partner who is essential to my support and my PAs.

“Late last night I received an email from my GP telling me that he had secured six vaccination slots at our local vaccine centre at midday today (Tuesday). And that was that.”

She published on Twitter a picture of herself being injected (pictured), and urged others in her situation to do the same.

She told Disability News Service that she could not say whether her lobbying of the government had had any impact.

But she said: “I think that GPs require the evidence set out for them and it helps to make a personal case for your vaccination.”

She said the vaccination programme appeared to be “somewhat ad hoc across the country” and so she would advise anyone who is CEV and requires care and support “to be proactive in getting themselves and their PAs vaccinated”.

She added: “I was surprised to receive my invitation so quickly although I have made it my business to establish a good relationship with all the people involved in my health and social care support over the years. Communication is the key.”

If the direct GP route had failed, she said, she would have tried her other health and social care providers.

She described the new guidance on PAs as “wise and timely”.

But she said: “I am personally relieved and thankful. However, I do think that there needs to be further clarification as to how people in this cohort can easily access the vaccination swiftly.”

Those seen as CEV who are under 70 years old are currently in the fourth priority group for the vaccine, but their PAs are now in the second group, which is why Baroness Campbell has been able to secure a vaccine along with her PAs.

She said: “What’s the point of vaccinated care workers when they can still carry the virus and give it to the CEV person? I made that point to my GP.”

DHSC had not responded to a request to clarify the position by noon today (Thursday).

*The Joint Committee on Vaccination and Immunisation