You are here: Home / Benefits and Poverty / ‘Shabby’ Labour fails again on disability rights, after abstaining on PIP cuts vote 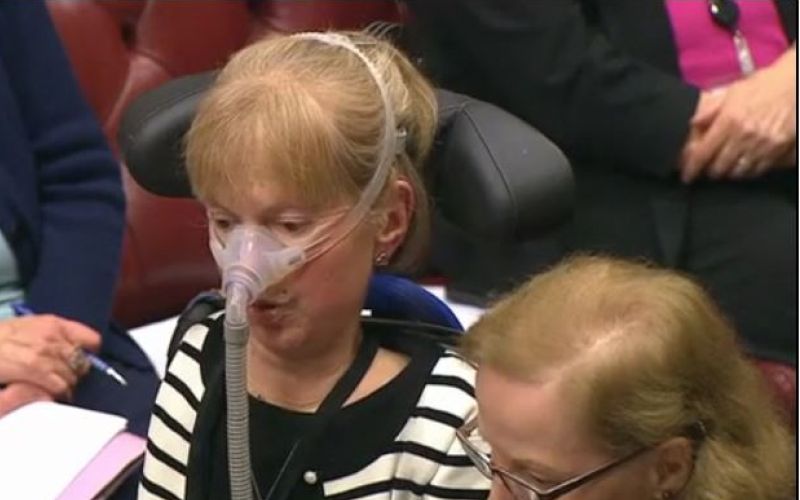 The Labour party has been heavily criticised for again failing to defend disabled people from attacks on their rights, after its peers refused to vote against “discriminatory” cuts to the government’s new disability benefit.

The House of Lords voted on Monday on a motion to “annul” new government regulations that will make it far harder for people with experience of severe mental distress to secure mobility support through personal independence payment (PIP).

But because Labour peers abstained, the government won the vote by 164 to 75.

Instead, Baroness Sherlock, Labour’s shadow work and pensions spokeswoman, proposed a weaker “motion of regret”, which was passed by 162 to 154 votes but left the regulations unaffected, although it did call on the government to review the impact of the changes within two years.

Despite Labour politicians celebrating the vote as a victory, the Department for Work and Pensions (DWP) told Disability News Service (DNS) yesterday (Wednesday) that it would ignore the Lords motion and would not carry out such a review.

Two days after the Lords debate, Labour’s shadow work and pensions secretary Debbie Abrahams attacked the government for refusing to allow a meaningful vote in the Commons on the new regulations, even though Labour’s peers had abstained on just such a vote only 48 hours earlier.

The government has scheduled a debate for 19 April, Abrahams said, but by then it will be too late to revoke the regulations, even if MPs vote against  them.

Marie Rimmer, the newly-appointed shadow minister for disabled people, attended yesterday’s emergency Commons debate, which had been secured by Abrahams, but did not speak, although it is not yet clear why.

Rimmer had told DNS earlier that “responsibility for these Tory cuts lies exclusively with Theresa May’s government and her commitment to cut social security whilst cutting taxes for the richest.

“Baroness Sherlock clearly explained that the un-elected House of Lords does not possess the power to overturn secondary legislation which has been accepted by the House of Commons.”

Baroness Sherlock had actually told fellow peers on Monday that the Lords had overturned secondary legislation five times since 1945 and that such action should only be taken by peers in “exceptional circumstances”.

But Baroness Campbell said on Monday (pictured) that the motion was an “exceptional circumstance”, and added: “I do not care that they have been debated and voted on only five times within a hundred years or whatever.

“I will gladly support it now.”

Disabled People Against Cuts (DPAC) said today that it “deplores” Labour’s actions in the Lords, as Baroness Bakewell’s motion “might have succeeded” and was “certainly the last chance to prevent this measure coming into force”.

DPAC said that by submitting the less powerful “regret motion”, Labour “effectively did the Tories’ work for them” by “spiking” Baroness Bakewell’s motion and replacing it with one that only asked for a review of the cut after two years.

The DPAC statement said: “It would have been better if Labour had done nothing. To later discover that Labour presented this shabby climbdown as a victory just added insult to injury for disabled people who will lose out through this PIP cut.

“And predictably the DWP have refused to hold a review, bringing a fitting end to this whole shameful saga.

“Labour in the Lords seemingly have no interest and no intention of fighting for disabled people’s rights.”

Labour has been repeatedly criticised for failing to stand up for disabled people’s rights over the last year.

In December, Baroness Campbell attacked Labour’s “lazy indifference” to disability equality, after it abstained on a vote in the Lords that would have forced bars, shops and restaurants to ensure their premises obeyed laws on accessibility when renewing their alcohol licences.

In November, Abrahams’ office invited a disabled people’s organisation to speak at the launch of her disability equality roadshow, and then withdrew the invitation after discovering that it wanted to talk about independent living.

And questions have been raised over whether shadow chancellor John McDonnell ever wrote a letter he publicly promised to send to Labour-run councils to ask them to ring-fence government money they receive to compensate for the closure of the Independent Living Fund.

The new PIP cuts came into force earlier this month and were brought in to reverse two upper tribunal rulings.

The government’s decision to reverse the rulings means an estimated 164,000 claimants will not now be eligible for the mobility component of the benefit or will receive a lower level than they would have received.

And an estimated 1,500 PIP claimants who need support to take medication and monitor a health condition will now either not be eligible for the PIP daily living payment or will receive a lower level.

Baroness Campbell told fellow peers on Monday that the “impact of panic attacks and anxiety, not to mention schizophrenia, dementia and autism, on being able to ‘plan and follow a journey’​ are equally fraught, if not more so, with profound obstacles than the effects of visual or physical impairments”.

She described how a young woman who lived near her had experienced a severe anxiety attack on a train, which had led to the train stopping and the emergency services being called.

She told peers: “This expensive scenario could have been avoided if her PIP had not been reduced from the high to standard rate award a couple of months ago, allowing her to continue paying for a travel companion or use taxis.

“Her life has now been severely restricted.”

She added: “It is a fundamental tenet of the Equality Act that there shall be no hierarchy of disability: we define a disabled person as someone with a ‘mental or physical impairment’.

“We in this House have welcomed the prime minister’s commitment to parity of esteem between mental and physical health.

“The amended regulations, sadly, completely depart from these vital principles.

Baroness Campbell said the cumulative effect of cuts to social care support, independent living entitlements and welfare benefits had “taken its toll on disabled people” and that it was becoming “increasingly tougher for them to participate in society as active citizens”.

She said: “These changed regulations represent another departure and fly in the face of the prime minister’s ambition to create ‘a society that works for everyone’.”

Lord Low said the new regulations were “a clear breach of faith with the disability community”.

He said mental health and other disability charities had supported the introduction of PIP in 2012 after the government assured them that people with mental health problems would not be able to score points only “under the criterion which used the words ‘psychological distress'”.

He said: “The regulations are in clear breach, if not of a manifesto commitment on this occasion, then certainly of pledges given to those with mental health problems in 2012.”

He added: “I believe these regulations are trying to move the goalposts by excluding people who experience psychological distress from eligibility for the higher number of points necessary for the higher rate of mobility component.

“In doing so, they effectively discriminate against people with mental health problems.”

The Liberal Democrat disabled peer Baroness [Celia] Thomas, who speaks for her party on work and pensions issues in the Lords, said: “The disorders likely to be affected, according to the DWP, range from schizophrenia and autism to bipolar affective disorder and cognitive disorder.

“So much for parity of esteem between physical and mental health.”

She said: “Is it not yet another tightening of the screw around the whole independent living project, which is assailed on every side?

“These regulations should be set aside to await proper consultation.”

But one disabled peer, the Conservative Lord Shinkwin, said he supported the government’s position.

He said: “I believe the taxpayer does not have a problem with someone needing assistance as a result of difficulties in navigating – for example, if they are blind.

“Taxpayers surely understand that conditions such as visual impairments and learning disabilities, where these are severe and enduring, are much less likely to fluctuate than, for example, psychological distress.

“Indeed, it makes sense that people who cannot navigate due to a visual or cognitive impairment are likely to have a higher level of need and therefore face higher costs.​”

He then appeared to suggest that he could not support providing the extra mobility benefits for people with severe mental distress until his local council stopped handing him parking tickets.

He complained that Lambeth council had been fining him for parking on yellow lines because he could not find anywhere to park after returning home late from working in the Lords, and that it had refused to provide him and other disabled people with their own parking bays.

He said: “This is just one example of why we urgently need to join the dots on disability if more disabled people are, as we all want, to live independently and work.

“Until we join those dots, I cannot in all honesty justify expecting taxpayers to be even more generous in helping to meet the extra costs of living with a disability, when the state itself imposes such indefensible extra costs on disabled people.”

Lord [Chris] Holmes, who in January ended his terms as disability commissioner of the Equality and Human Rights Commission, and another disabled Tory peer, also voted with the government against both motions, but did not speak in the debate.

The junior work and pensions minister Lord Henley insisted that the regulations were “not a policy change” and were just “bringing clarity” to the legislation.

He said: “It is inaccurate to describe this as a cut: it is merely the reassertion of the original policy intention.

“In PIP, we have ensured parity of treatment between mental and physical conditions.

“It achieves that by looking at the overall needs of an individual, not just what conditions they have.

“The whole point – if I can put it this way – of the PIP assessment is to distinguish between those differing levels of need. There is no discrimination in that.”