You are here: Home / Human Rights / Supreme Court ruling ‘risks bringing in euthanasia by the back door’ 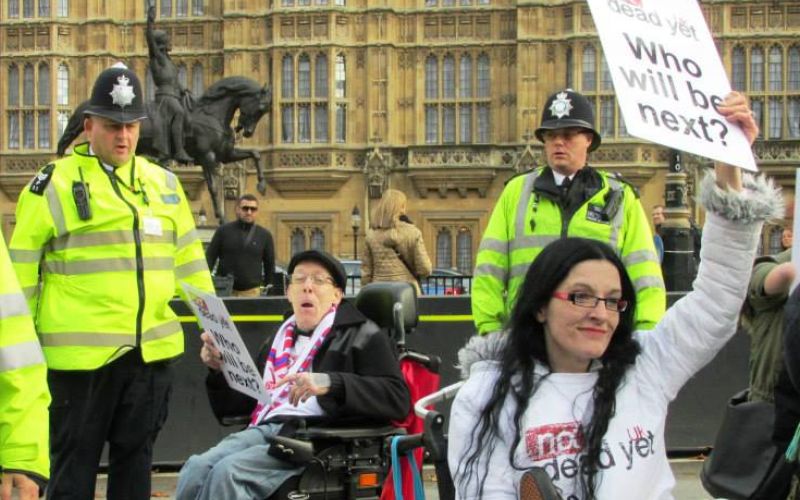 Disabled campaigners have warned that a Supreme Court ruling has removed a vital safeguard that protected the lives of brain-damaged patients who have been left unconscious.

The Supreme Court ruled this week that families and doctors will no longer have to seek a court order if they agree to end the life of a patient with a “prolonged disorder of consciousness” (PDOC)* by withdrawing food and fluids.

The court had been hearing the case of a man, Y, who never regained consciousness after a heart attack left him severely brain-damaged and in a permanent vegetative state (PVS).

Y had to be kept alive with water and liquid nutrition, but his family and doctors agreed that it was in his best interests for this to be withdrawn so he could be left to die.

The NHS trust that was treating him sought a declaration from the courts that they could do so without an order from the Court of Protection.

This was granted by the high court, but the official solicitor appealed to the Supreme Court, which this week unanimously dismissed the appeal.

Disabled campaigners have raised grave concerns about the judgment.

Not Dead Yet UK (NDY UK) said that it campaigns against changes in the law on assisted suicide and does not comment on issues outside this area but was still “deeply concerned about anything which leads to vulnerable disabled people being put at a greater risk regarding their life chances”.

Dennis Queen (pictured, right), an NDY UK member, said: “In my personal opinion the removal of independent oversight of the Court of Protection [in the case of doctors deliberately killing patients] is severely damaging to the individual’s right to live and decide.

“It could be said to begin to allow euthanasia by the back door.

“The difference between removing mechanical life support from a brain-dead patient and removing basic sustenance from a patient with some brain damage is phenomenal.

“It’s the difference between allowing somebody to die and actively killing them.

“PVS patients can and do recover. The consequences of their brain damage can vary wildly.

“People this has happened to are part of our network. We know some people remember every single thing, too.”

Queen added: “Death by dehydration is a torturous way to die. Completely unlike instant suffocation, it typically takes weeks to die during which internal elements of the body literally rip open, including organs, the tongue and so on. It’s not a humane way to die.

“I am deeply concerned that this is a way they can evade current law on killing live patients whose lives they’ve decided are not worth living.”

Nikki Kenward, campaign director of The Distant Voices, a user-led campaign group which opposes euthanasia and assisted suicide, said this week’s ruling meant thousands of people could now be “at risk of dying against their wishes at the behest of doctors and families”.

She said she feared it was another step on the “slippery slope” towards the legalisation of euthanasia.

Kenward, who herself recovered from being in a “locked in” state for five months, said that putting more power into the hands of doctors and families “alarms me a great deal”.

She pointed to two people who had previously taken part in Distant Voices workshops, both of whom have recovered from being in a PVS after being “given up on by the hospital”.

One recently gave a speech at her daughter’s wedding and the other is now healthy, a father and in his late 20s, said Kenward.

“Taking these decisions away from the Court of Protection removes an important layer of legislative scrutiny and accountability and effectively weakens the law.

“It will make it more likely that severely brain-damaged patients will be starved or dehydrated to death in their supposed ‘best interests’ and that these decisions will be more influenced by those who have ideological or financial vested interests in this course of action.”

He added: “Given that it costs about £100,000 per year to care for a person with PVS or MCS, the potential ‘saving’ for the NHS could be as much as £2.4 billion annually if most seek to go down this route.

“Given the huge and growing financial pressure the health service is under is this really an additional pressure, no matter how subtle, we want to put medical staff and administrators under?”

Compassion in Dying, the sister organisation of the pro-assisted suicide campaign group Dignity in Dying, welcomed this week’s ruling.

It described the ruling as “an important move towards more person-centred care, because it means that what’s best for the individual can be decided by their medical team and loved ones, and acted upon more quickly, rather than spending months or even years waiting for a court decision”.

Y died last December but the Supreme Court decided that the appeal should go ahead “because of the general importance of the issues raised by the case”.

Lady Black, who delivered the judgement, which was agreed by the four other Supreme Court justices who heard the case, disagreed with the official solicitor, who had argued that common law or the European Convention on Human Rights meant the Court of Protection should be asked to rule on every case.

The official solicitor had argued that the patient’s “vulnerable position” was safeguarded by having an “independent and neutral person” who can “investigate, expose potential disputes, and give the patient a voice in the decision-making” through a court hearing.

But Lady Black concluded that if the Mental Capacity Act and relevant medical guidance – particularly that of the General Medical Council – was followed, and there was agreement among family and doctors on “the best interests of the patient”, there was no need for a court order.

She said that, “although application to court is not necessary in every case, there will undoubtedly be cases in which an application will be required (or desirable) because of the particular circumstances”.

*PDOC includes patients left in a permanent vegetative state or in a minimally conscious state.