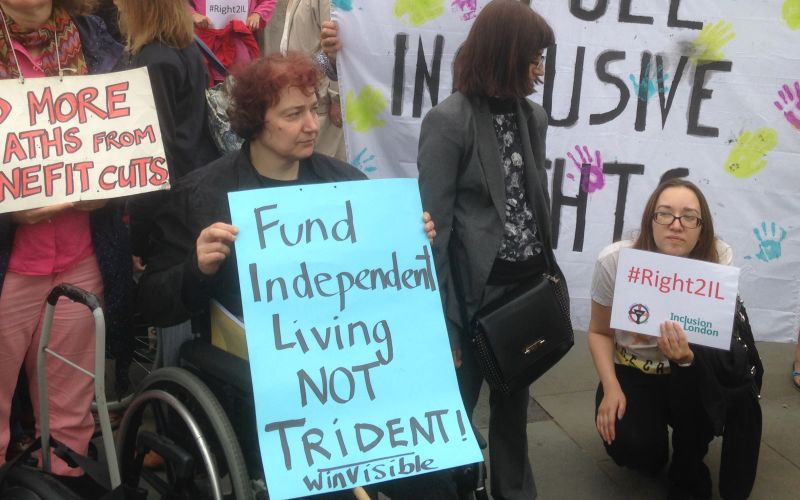 A grassroots group has warned MPs that the “terrifying insecurity” caused by the government’s regime of disability benefit assessments is driving disabled women to destitution, and even “hastening their deaths”.

WinVisible has submitted evidence to the Commons work and pensions select committee about the impact of the assessments on some of the many disabled women they have supported with their employment and support allowance (ESA) and personal independence payment (PIP) claims.

The campaigning organisation, which is based in north London and provides information, advocacy and support to disabled women, says the ESA and PIP assessment regimes are causing “a terrifying insecurity” among disabled women, and leading to “suicides or admissions to NHS psychiatric institutions”.

Benefit cuts imposed by the government and implemented by assessors from contractors Maximus, Capita and Atos cause “enormous suffering, destitution and [are] hastening deaths of sick and disabled people”, says WinVisible.

The evidence has been submitted as part of the committee’s inquiry into the PIP and ESA assessment regimes.

Last week, Disability News Service (DNS) reported how the inquiry had produced more online evidence from the public than any other investigation ever held by a House of Commons select committee.

In its written evidence to the inquiry, WinVisible says many women experience “particular discrimination and suspicion” about their eligibility for disability benefits, including those with invisible impairments; those with mental distress; survivors of child abuse, rape and domestic violence; mothers deemed not eligible for support because they are caring for their children; and traumatised refugees.

One issue raised in the WinVisible evidence is that of disabled women whose PIP or ESA claims have been disallowed because they have missed their face-to-face assessments.

They provide details of one woman who lost her ESA entitlement because she was not able to run for a bus, due to a long-term health condition, and missed her assessment, even though she had rung the centre to tell them she would be 10 minutes late.

Another woman helped by WinVisible, a mental health service-user and child abuse survivor, was placed in the ESA work-related activity group after her assessment, and was pressured to apply for jobs.

On one occasion, when she turned up to a meeting in tears, an adviser for the government contractor Maximus told her: “You can choose to be a victim or you can go and get a job.”

Maximus was forced to apologise, and following intervention by WinVisible and the woman’s MP, the Department for Work and Pensions agreed to place the woman in the ESA support group, for those with the highest support needs.

Another disabled woman helped by WinVisible had her benefits removed for several weeks because she had to cancel a face-to-face assessment so she could attend an urgent NHS appointment.

One disabled woman told WinVisible: “The hoop jumping, form filling and getting support to get benefits, and keep them, has pushed me to the end of sanity and destroyed my faith in the powers that be.

“I have been made to feel like a criminal and guilty before being charged.”

WinVisible also raised concerns in its statement about the number of disabled women who face “unjust and unjustifiable” rejections of their requests for exemptions from face-to-face assessments.

Claire Glasman (pictured), from WinVisible, told DNS that many disabled women became suicidal because of their experience of the benefit assessment system.

She said: “They are absolutely distraught that their situation and their needs are not being taken into account, and they are faced with destitution.

“We felt strongly that we wanted to have our say on what is happening to us and the women that we know.

“It is very, very serious because people’s survival is at stake.”