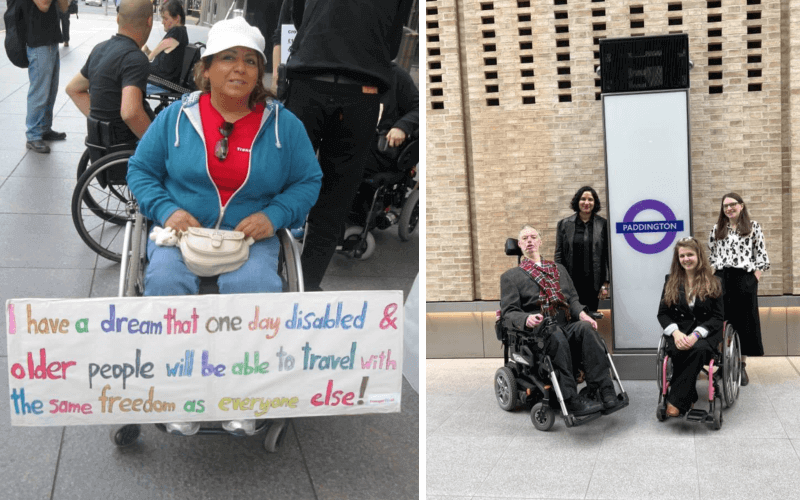 Disabled campaigners were this week marking the long-awaited opening of London’s new Crossrail scheme by celebrating their historic success in forcing the authorities to provide step-free access to all 41 of its stations.

But they have also warned that a proposed new government crackdown on protesters could restrict the options available to disabled activists who want to protest legally in the future.

Transport for All (TfA) launched its Crossrail campaign in 2013 after it emerged that seven of the stations of the new high-profile rail route – now rebranded as the Elizabeth line – would not be accessible to wheelchair-users and others with mobility impairments.

TfA began its campaign with a complaint to the Advertising Standards Authority, after transport bosses repeatedly described Crossrail as an “accessible railway”.

During the campaign, TfA also lobbied MPs and held protests.

The following year, first the mayor of London, and then the Department for Transport, announced further funding – £33 million in total – to ensure that all seven stations would be step-free from street to platform level.

The much-delayed scheme will connect Reading and Heathrow Airport to the west of London with central London stations and Shenfield and Abbey Wood to the east of the capital.

This week, the first section of the Elizabeth line opened to the public, and by the time the whole line is open, all 41 stations along the line will have some form of step-free access, either through level boarding or the use of manual boarding ramps.

Paula Peters, a TfA member who campaigned outside Crossrail’s Canary Wharf headquarters in August 2013, said: “It was a well-attended demonstration and we made a lot of noise.

“We weren’t going to give up until we could ride the line with the same freedom as everyone else.

“Supporting campaigns like this is vitally important because we are not campaigning for fully accessible public transport for disabled people today, but for the future generations who come after us.

“Each campaign win means we come one step closer to fully accessible step-free public transport across the network and across the country – each win brings the dream closer to reality.”

But she pointed out that the government was now trying to clamp down on protest, through measures in the Police, Crime, Sentencing and Courts Act, which became law in April, and the new public order bill, which was debated in parliament this week (see separate story).

She said the victory meant that disabled people would be able “to turn up and travel and go about our lives”.

But she added: “The public order bill (and the Police, Crime, Sentencing and Courts Act) will mean that we won’t be able to turn up outside rail offices to protest about lack of access and have a noisy protest as we will be classed a nuisance and face the risk of arrest.

“Now the government want to silence our voice and stop us from highlighting and fighting the discrimination and marginalisation we face in every area of our lives.

“We must find ways to counteract this bill and continue to highlight injustice and exclusion and continue the fight for social change. It’s important now more than ever.”

Caroline Stickland, TfA’s newly-appointed chief executive, added: “For Transport for All, the original plans for the seven Crossrail stations were unacceptable.

“Such a flagship infrastructure project simply could not be designed to be inaccessible to wheelchair-users and many other disabled people.

“Today we are celebrating and paying tribute to the brilliant campaigners who tirelessly fought to make the line more accessible for everyone.

“Beyond the celebrations today, we still have a long way to go to achieving a fully accessible transport system in the UK.”

Pictures: A TfA member at one of the Crossrail protests, with a placard that says: “I have a dream that one day disabled and older people will be able to travel with the same freedom as everyone else.” Photo by Paula Peters. Second picture by Christina Holka shows TfA chair Alan Benson, TfA’s former director Faryal Velmi (second from left), and TfA’s Katie Pennick and Caroline Stickland (right) at Paddington station this week for the Elizabeth line opening