You are here: Home / Human Rights / Peer admits real reason he thinks terminally-ill people should be helped to die 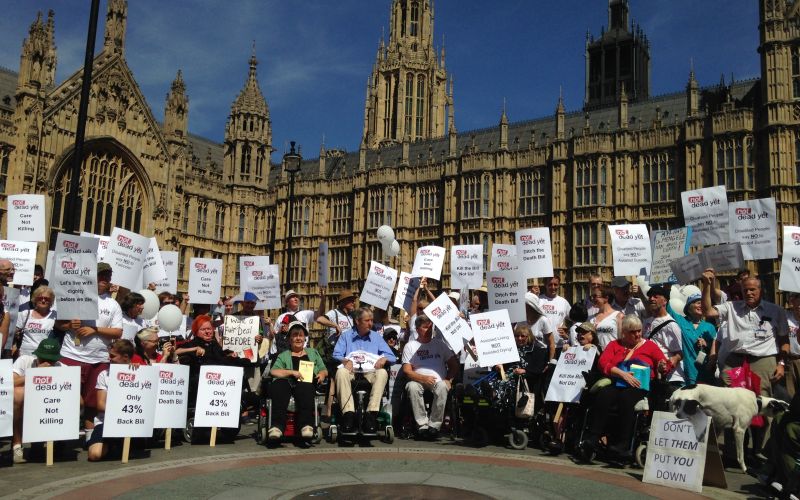 The most prominent cheerleader for the legalisation of assisted suicide has admitted that he believes the real reason the law needs changing is to help people who cannot tolerate the idea of losing their independence.

Lord Falconer, who for several years has led failed parliamentary attempts to secure legislation, said the law needed to be changed because a small number of people found it “intolerable” to have to rely on other people.

His “discriminatory” comments came as a Labour MP announced a fresh bid to introduce laws legalising assisted suicide, this time through a private members’ bill in the House of Commons.

Lord Falconer, a Labour peer, told the BBC’s The Daily Politics (42.50 onwards): “The work that has been done in relation to this shows generally it is not the pain, it is not the fact that you can’t relieve pain – that can be dealt with – it is the sense of people losing their independence and being reliant on other people, and there’s a small number of people who whatever you do would find that an intolerable position to be in.”

He had been responding to concerns raised on the programme by the disabled campaigner Agnes Fletcher, a former director of policy and communications at the Disability Rights Commission and now director of the thinktank Living and Dying Well.

She had told the programme that the recent case of Jeffrey Spector – who killed himself at the Dignitas clinic in Switzerland, six years after he was diagnosed with an inoperable tumour growing near his spinal column – was an example of someone who was “afraid not of dying but of living for a long time with serious disability”.

Fletcher said: “He talked very much about his reasons being not wanting to be a burden on his family and thinking that his death was in the best interests of his family.

“Those are very worrying reasons and I think lots of older and disabled people watching that case last week will have also felt a burden and also felt perhaps it was time for them to opt for suicide.”

She said: “I think this indicates what I have always feared. Lord Falconer and others who are campaigning for assisted suicide legislation think it’s reasonable that people who are severely incapacitated should end their lives at the time of their choosing.

“They think this because they view progressive disabling conditions as something intolerable, which cannot be improved no matter what remedies are put in place or offered.

“These discriminatory views are endemic within society and we must fight them all the way. Life doesn’t stop when you become severely disabled.”

Dignity in Dying (DiD), the charity leading the campaign to legalise assisted suicide, said: “As well as people who would want the option of assisted dying in case their suffering became too much, we know from Oregon that the top reason cited for having an assisted death is the loss of autonomy, which rightly is determined by the dying patient.

“Whether it’s pain, concern of a painful death, or the loss of autonomy, it is right that dying people have the choice in how they die.”

A DiD spokesman later confirmed that the charity agreed with Lord Falconer’s comments on The Daily Politics.

Meanwhile, Labour MP Rob Marris has announced that he will introduce a private members’ bill that aims to legalise assisted suicide.

Marris came top of the ballot that decides which private members’ bills are allocated Commons time. His bill – identical to Lord Falconer’s – is set to be debated by MPs on 11 September.

Lord Falconer’s bill ran out of time after it reached the committee stage in the Lords before the general election, and although he has re-introduced his bill in the Lords, he was not placed highly enough in a ballot of peers for his proposals to make any progress in this session.