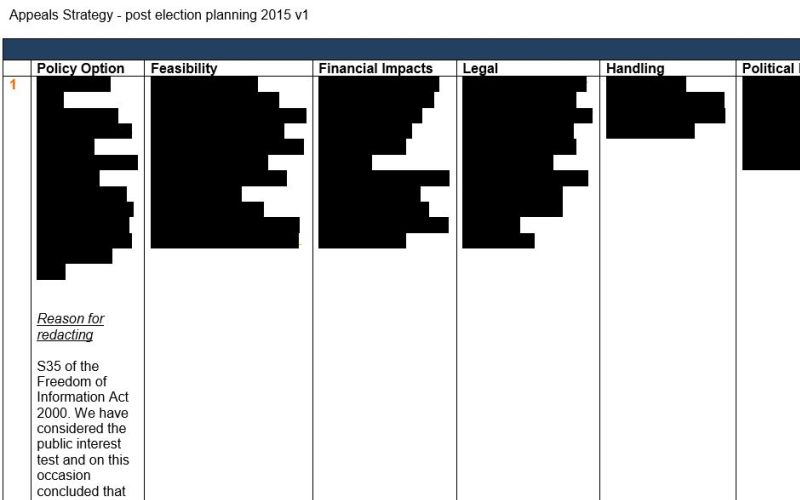 The Department for Work and Pensions (DWP) has drawn up secret plans for sweeping reforms that would make it far harder for disabled people to appeal against having their benefit claims turned down.

The heavily-redacted document was sent to Disability News Service (DNS) by DWP following a freedom of information request, but disabled activists from the grassroots campaign network Black Triangle managed to reveal the words behind the blacked-out areas.

The document, titled Appeals Strategy – Post Election Planning (pictured), was drawn up by civil servants just before last year’s general election, and contains 11 policies for a new government to consider, most of which are aimed at reducing the number of successful benefits appeals and cutting welfare spending.

Eight of the policies – which appear to be focused heavily on disability benefits such as employment and support allowance (ESA), personal independence payment (PIP) and disability living allowance – were redacted by DWP so they could not be read.

Work on introducing two of the three non-redacted policies is already underway.

Among the eight redacted policies is a plan to introduce a completely new appeal system, which would mean far fewer appeals being heard by tribunals, for example those concerning a point of law, with others heard by “an alternative dispute regime”.

The document warns that such a move would “raise significant concerns around restricting access to justice”.

One of the most controversial proposals is to stop paying ESA to claimants while they wait for their appeals to be heard, a process which can take many months.

Ministers have already stopped paying ESA to claimants waiting for a mandatory reconsideration (MR) of their claim, the new compulsory stage of the appeals process.

The document warns that such a move would be “controversial”, particularly because the Commons work and pensions select committee has “continually called for the reinstatement of ESA during the MR process so would be likely to oppose the withdrawal of payment pending appeal”.

The document also suggests that ministers could reduce the time limit to appeal to a benefits tribunal – for those who miss the initial one-month deadline – from 12 months to just three, but warns again that this would “attract criticisms that we are limiting access to justice”.

Another idea would restrict appeal tribunals so they would only be allowed to consider whether DWP had followed the “correct decision making processes” rather than carrying out “a full review of the facts of the case”. Appeals that need the facts of a claim to be looked at would be heard instead by the high court.

A fifth policy would introduce charging for appeals, and it warns that such a proposal “attracted negative coverage in the media/lobby when reported previously”, while the introduction of fees for employment tribunals (ET) has been “blamed for the large reduction in ET appeals this year”.

Although DWP said last night (20 April) that the “speculative policy formations” in the document do not represent government policy, a spokeswoman admitted that they had been redacted under the Freedom of Information Act because they contain “information in relation to formulation of government policy”.

He said the document “lays bare the Tory government’s unrelenting quest to emasculate disabled people’s access to benefits, and to justice”.

McArdle said that the document, together with DWP’s attempts to hide secret internal reviews carried out into benefit-related deaths, and the refusal of its ministers to act on a coroner’s “prevention of future deaths” report following the death of ESA claimant Stephen Carré in January 2010, showed the government’s “driving force” was to “cut disabled people’s support, rather than address these issues and the grave danger to wellbeing and indeed life that they represent”.

He said: “They are now looking at how they can suppress our fundamental human rights even further.

“They are playing Russian roulette with disabled people’s lives and are looking to put more bullets into the chamber.”

McArdle said the policies would be a “flagrant violation” of article six of the European Convention on Human Rights, which he said protects “the right to a fair hearing and equality of arms before an impartial judiciary in an open, free and democratic society”.

David Beckett, who supervises the welfare benefits team at Coventry Law Centre, part of Central England Law Centre, said the “draconian” policies were “clearly about restricting the rights of appeal to claimants” and “restricting people’s access to justice”.

He said they could be “financially devastating” for people if introduced, and could mean the difference between “choosing to eat, choosing to heat your home, choosing to pay your rent… anything other than mere existence”.

He added: “Some of the potential measures are effectively saying, ‘We are not just restricting it, we are getting rid of your rights to access to justice,’ because people will not be in a position to challenge decisions.

“Most of the measures are about stopping people having any right of redress.

He said DWP’s assessment process appeared not to be fit for purpose, with three-fifths of PIP appeals successful.

He said: “If people are put off [appealing] by charges, or tribunals are not able to look at the facts of the case, people’s redress is significantly compromised and those decisions are more likely to stand.

He added: “The tribunal system does work, it works well. It just needs more resources.

“Access to justice should be a fundamental right. This is stopping that and it would mean people have no benefits, or significantly reduced benefits, and I am sure people could lose their lives as a consequence of that.”

Dr Eilidh Whiteford, SNP’s social justice and welfare spokeswoman, said: “Even for the Tories these proposals are utterly shocking – I want clear assurances from the new [secretary of state for work and pensions] Stephen Crabb that they will never see the light of day.”

“The UK government’s ridiculous denials are getting them in a tangle as these ideas were clearly being discussed as part of their policy development.

“It highlights once again the relentless attacks by this government on the disabled.”

Among other ideas proposed in the document is to provide “paper based” hearings at the first-tier tribunal (FtT), instead of claimants having the chance to make their case in person.

DWP suggests that this would cut spending on benefits, because fewer cases are overturned with paper-based appeals.

Beckett said such a change would cause “significant difficulties” for groups such as people with learning difficulties or dyslexia or for whom English was not their first language.

Other measures proposed include “controlling the FtT – ensuring tribunal decisions are accurate”, and forcing tribunals to adjourn a hearing if presented with “late documentary evidence” by a claimant.

A DWP spokeswoman said: “These speculative policy formulations were drafted by staff before the last election as part of their preparation for a new government.

“They have not been raised, do not represent government policy and have never been sent to ministers.”

But when asked whether ministers had permanently and definitively ruled out the eight redacted policies, the spokeswoman would only say that the department “has no plans to introduce these changes”.