You are here: Home / Activism and Campaigning / Kamil Ahmad: Anger over review’s failure to expose systemic flaws that led to murder 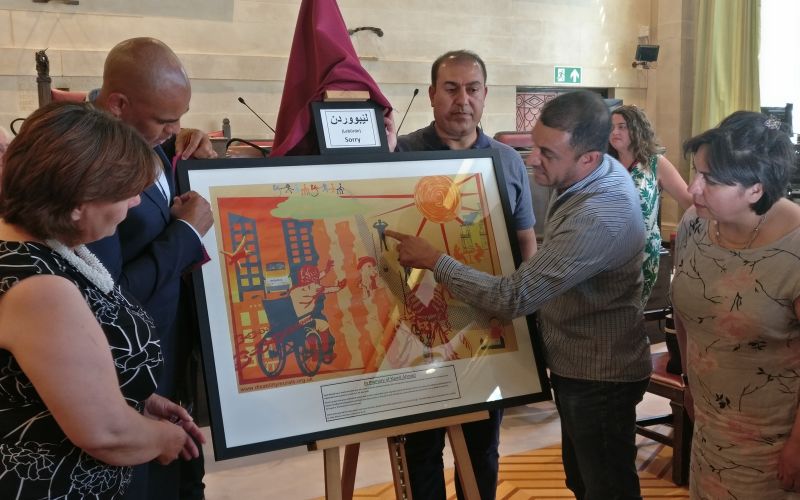 The brother of a disabled asylum-seeker who was brutally murdered by a racist neighbour has joined disabled activists in criticising a “safeguarding review” for failing to expose the “catalogue of injustice” he faced in the years leading to his death.

They spoke out during a series of events in Bristol that were held to honour the memory of Kamil Ahmad, and another disabled refugee, Bijan Ebrahimi, who were both murdered by racist neighbours in the city.

The memorial included the unveiling at Bristol’s City Hall of a copy of a mural that Ahmad helped create, which will be hung in the building’s foyer, followed by a march through the streets of the city to a nearby venue where campaigners discussed the barriers faced by disabled asylum-seekers and how to fight for change to the systems and agencies blamed for the two murders.

Days before the memorial events, the safeguarding review, commissioned by Bristol Safeguarding Adults Board, had concluded that the murder of Kamil Ahmad in July 2016 by Jeffrey Barry “could have been avoided”.

The two men had been living in separate flats in the same supported accommodation, but Ahmad had repeatedly told staff and police in the months and years leading to his death that Barry had been threatening and assaulting him and that he did not feel safe.

Barry was finally sectioned following growing concerns about his behaviour, which included writing notes threatening to kill a number of people, including Ahmad.

But he was released from hospital the following month on the orders of a mental health tribunal. Neither Ahmad nor the police were told of his release.

Hours later, Barry attacked Ahmad and stabbed him to death in his own room.

Bristol social services – which Ahmad had also told about his fears for his safety – had been about to evict him and leave him destitute on the streets, and only announced that this decision had been reversed the day after he was murdered.

Barry was convicted of murder last year and will serve at least 23 years of a life sentence.

Kamil Ahmad’s brother, Kamaran Ahmad Ali, who attended the memorial events, told Disability News Service that he was “not happy” with the review, and that both the police and health services had failed to admit their mistakes.

He said he wanted what had “happened to me not to happen to anyone else. I can’t get my brother’s life, but we can get that”.

But he said he welcomed the memorial events and believed that bringing disabled activists and disabled asylum-seekers together was “a very good thing”.

He had earlier said at the unveiling of the picture that his brother’s murder by a “brutal and racist person” was “inhuman” and that “the silence and negligence of the organisations that were responsible for protecting him makes this suffering even harder to bear”.

He said: “None of those organisations and institutions managed to protect Kamil’s life from this racist person, otherwise Kamil would have been with us now.

“Our request is that those who were in charge of Kamil and people like him should reassess their practice and try to improve their services in order to prevent more lives to be lost.”

Three of the main organisers of the memorial events – Rebecca Yeo, a disabled academic and friend of Kamil’s; Ellen Clifford, from Disabled People Against Cuts (DPAC) and the Reclaiming Our Futures Alliance; and Mike Steel From Bristol DPAC – said the review had failed to expose repeated injustices.

In a joint statement, they said they were pleased the review had recognised that Kamil had been subjected to “systemic racism” and had been failed by many agencies in the city.

But they added: “There could have been deeper investigation into potentially racist attitudes towards Kamil as an asylum-seeker by services that should have been providing support”.

And they pointed out that decisions by Bristol City Council that led to a disabled man with high support needs being assessed as ineligible for support were “barely referred to, let alone questioned” in the review.

They also said the review had failed to expose the police’s failure to protect Kamil, who had repeatedly asked for action to be taken in response to Barry’s violence and racist threats.

And they were highly critical of the review’s repeated references to Kamil and other disabled people as “vulnerable”.

They said: “All humans are vulnerable. People become more vulnerable if barriers are faced getting their rights met.

“Kamil was failed by multiple agencies. He died because insufficient action was taken to prevent someone intent on killing him.

“That is not a sign of Kamil’s ‘vulnerability’ but of agency failure.”

They also said the review appeared to show that “as a service-user and as a refused asylum-seeker, Kamil’s rights to live free from abuse, harassment and fear were denied”.

They added: “The repeated communication failures between the NHS, voluntary and private sector services which also contributed to Kamil’s murder are simply not a matter of ‘learning lessons’ or ‘designing new pathways’.

“We believe these are a direct consequence of drastic funding cuts, unaccountable commissioning and the impact of service fragmentation on front-line staff.”

Bijan Ebrahimi, a disabled refugee who was also brutally murdered by a racist neighbour in Bristol, had also made repeated pleas for the police and other agencies to protect him before his death in 2013.

As a tribute to Ebrahimi at the unveiling at City Hall, the city’s first poet laureate, Miles Chambers, read the poem he wrote about the murder.

The poem included the lines: “Faith in the police respected British rules and authority/Bijan thought they’d take care of me.”

And: “Wake me up, shake me, give my cheek a pinch/Was I dreaming? Was this 1950s Mississippi/Did we just witness a lynch?”

Ebrahimi’s two sisters had attended the unveiling and had asked Chambers to read his poem at the event.

Alex Raikes, strategic director for the Bristol charity Stand Against Racism and Inequality (SARI), told the unveiling event that both Kamil Ahmad and Bijan Ebrahimi were supposed to be in housing “where they could be safe”.

She said that both men had been disabled, and much of their impairments were “hidden, much exacerbated and made worse by the systems they were fighting here in the UK”.

Raikes said both Kamil and Bijan had used the system but “were failed because they were not listened to.

“The system didn’t listen to them, and worse still it didn’t take them seriously and didn’t really believe in the racism they were suffering.”

Marvin Rees, the mayor of Bristol – who was elected just two months before Kamil Ahmad’s murder – apologised to the relatives of both men “on behalf of Bristol”.

He told them: “I do hope you take from today… that both Kamil and Bijan’s lives matter.”

He said the city was committed to ensuring that there were people working in its institutions “who are committed to make sure that safety is the norm and is something we can guarantee and it is not an exception” and that “the support around individuals and communities, the response to people raising concerns, is as good as it should be”.

Following the memorial events, organisers and representatives of groups that had taken part – including Yeo, DPAC, Bristol DPAC, TUC, Bristol Disability Equality Forum and Bristol Refugee Rights – wrote to Rees and the city’s MPs, calling for urgent action and a meeting with them and Bristol social services.

They warned that the failings by agencies that had affected Kamil were “neither unusual nor the result of oversights”.

And they said they knew of at least three disabled asylum-seekers with mental health conditions who had been evicted by the city council from social services supported accommodation and left homeless with no support.

They said: “It is only a matter of time before we have the next tragedy and then the next apology.

“We need urgent action to find a solution to this inhumanity and to turn Bristol’s apology into practical change.

“We are fully aware that local authority budgets are in crisis and that social services have to make huge cuts.

“The impact of this needs to be highlighted at a national level but we also need to find solutions at local level.

“This is an urgent issue of saving lives, right now in Bristol.”

Picture: Kamil Ahmad’s brother, Kamaran, points at the copy of the mural, watched by Bijan Ebrahimi’s two sisters, Marvin Rees (second from left), and one of Kamil’s cousins