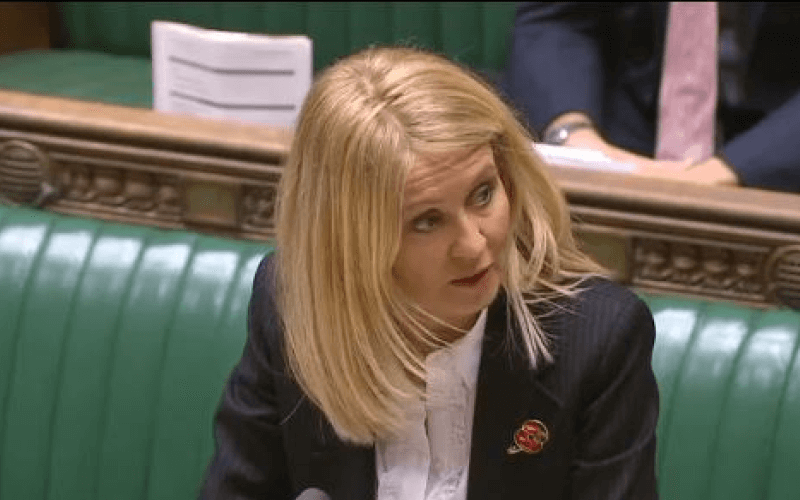 Esther McVey has quit as work and pensions secretary without answering questions she was asked by MPs four months ago about whether her department covered up links between its hated fitness for work test and the deaths of benefit claimants.

McVey (pictured) resigned last week in protest at the prime minister’s Brexit deal, but her resignation came months after two opposition spokespeople wrote to her about claims of a possible cover-up by the Department for Work and Pensions (DWP).

Neither Marsha de Cordova, Labour’s shadow minister for disabled people, nor Stephen Lloyd, the Liberal Democrats’ work and pensions spokesman, had received a response from McVey to their questions by the time she quit the department.

They had written to her after Disability News Service (DNS) reported how DWP was refusing to say if it showed key documents linking the deaths of claimants with the work capability assessment (WCA) to Dr Paul Litchfield, the independent expert the government hired to review the test in 2013 and 2014.

Litchfield carried out the fourth and fifth reviews of the WCA but has refused to say if he was shown two letters written by coroners and a number of secret DWP “peer reviews”.

Litchfield, who was recognised by the prime minister with a CBE in June’s birthday honours, published his two reviews in December 2013 and November 2014, but neither of his reports mentioned the documents, which all link the WCA with the deaths of claimants.

De Cordova wrote to McVey seeking answers about the documents on 25 July, nearly four months ago, and has yet to receive a reply.

Lloyd’s letter to McVey, written a week later, on 2 August, said it would be “astonishing” if Litchfield had not been shown the documents.

His letter added: “In light of Dr Litchfield being awarded a CBE, could you please confirm whether or not he was shown the documents linking the government’s WCA program with the deaths of benefit claimants?”

Weeks later, having failed to receive a reply, Lloyd wrote a follow-up letter.

His office confirmed this week that McVey had failed to reply to either letter.

Even though DWP possessed both the coroners’ letters and all the peer reviews, it has claimed in a freedom of information response that it holds no information in its records to show whether they were passed to Litchfield while he was reviewing the WCA.

A DWP spokeswoman refused to explain why McVey had not answered the letters from de Cordova and Lloyd.

Instead, she repeated a previous comment from the department, stating that Litchfield’s reviews were “independent” and that “DWP provided information alongside other stakeholders – on request”, while “any evidence used was referenced in the review”.

Since DNS revealed the existence of the documents in the years after Litchfield’s final report was published, concerns have grown that DWP and some of its ministers deliberately covered-up evidence showing the fatal impact of the assessment on disabled people.

The coroner’s letters followed the deaths of two men with mental health conditions in 2010 and 2013, and were sent to DWP in the spring of 2010 and early 2014, each warning of further such deaths if changes were not made to the WCA.

Peer reviews – now known as internal process reviews – must be carried out by DWP civil servants into every death “where suicide is associated with DWP activity”, as well as other deaths and serious and complex cases that have been linked to DWP activity.

Professor Malcolm Harrington, who carried out the first three WCA reviews in 2010, 2011 and 2012, has told DNS he believes he was shown neither the first coroner’s letter (the second letter had not been written by the time he completed his third review) nor any WCA-related peer reviews.