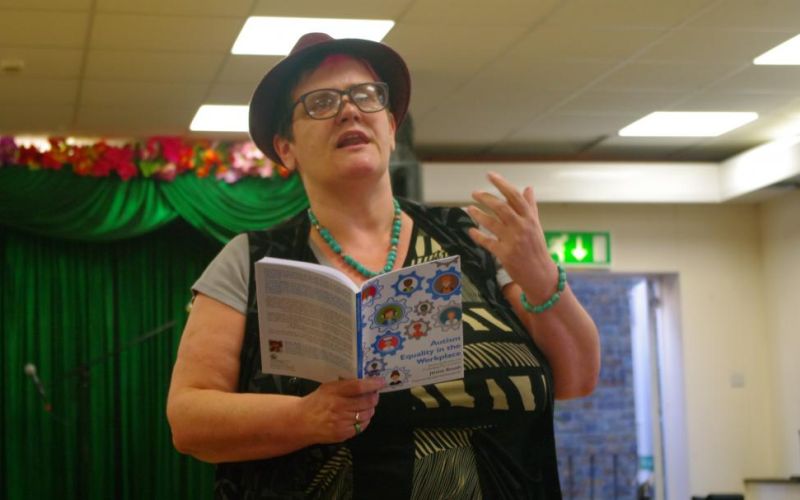 Disabled trade unionists have unanimously backed calls for a national demonstration this autumn against cuts to support for disabled children and those with special educational needs.

Booth (pictured), whose motion was passed unanimously, was speaking at the TUC Disabled Workers’ Conference in Bournemouth, which was attended by disabled delegates from 22 unions.

Her motion said the cuts would have a “significant adverse effect” on the education and job prospects of disabled children, and on the resources available to education workers, and that these and other austerity cuts were “not an economic necessity but a political choice”.

Booth said that cuts like these were forcing disabled children out of mainstream schools and into segregated special schools.

The government’s own figures show that the proportion of pupils with statements of special education needs or education, health and care plans who were attending state-funded, mainstream secondary schools plunged from 28.8 per cent in 2010, to just 22.2 per cent in 2017.

But Booth said there was “a fightback going on” and that it was important the demonstration took place “to stop a further round of cuts next year and reverse the cuts that have been made”.

She told fellow delegates: “It is very disappointing to me that a Labour council will go ahead with making the cuts even when local Labour bodies have told them not to.

“They talk about ‘difficult choices’, by which they mean which services to cut.

“I would like to hear less from councils about difficult choices and more about making the right choices, and the right choice is not to make the cuts to support for disabled children on their education.”

Mandy Hudson, from the National Education Union, said: “The fact that this government continues to cut SEND funding is another way to show its disdain for us as disabled citizens.

“The government is shaking the leaves of a magic money tree and allowing it to fall into the back of the sofa of grammar schools to the tune of £50 million.

“How much would £50 million do in our mainstream schools to make sure that inclusive education was properly funded and resourced?”

Austin Harney, from PCS, the UK’s largest civil service trade union, told fellow delegates how, as an autistic child educated in an “autism compound” behind a mainstream school, he and his classmates had been kept inside on a hot, sunny day.

Their parents were later told they had not been allowed out of their classroom because it was the harvest festival and “the parents of the normal children are here and if they find out about this compound, about your children, they will take their children away from the school”.

Harney said: “If the Tories continue to have their way, we could return to that kind of era.”

Meanwhile, the Department for Education has announced £50 million funding “to create additional school places and state-of-the-art facilities” for children with SEND, much of which will be spent on new special schools.

The government said the funding “could help create around 740 more special school places and provide new specialist facilities to support children with complex needs, such as sensory rooms and playgrounds with specialist equipment”.

It is not clear exactly how much of that fund – and the new money – will be used by special schools and units and how much by mainstream settings.

A DfE spokesman said it would be for local authorities “to decided how they split it between mainstream and special schools” after consulting with stakeholders.

And he said he did not have figures showing how much of the £215 million had been allocated to special schools.

But Michelle Daley, interim director of The Alliance for Inclusive Education (ALLFIE), and ALLFIE’s chair Navin Kikabhai, said it was “yet another Department for Education announcement demonstrating the UK government’s blatant ideological reluctance to acknowledge and assert the rights of disabled people to a fully inclusive education system.

“Creating segregated education under the euphemism of ‘free’ schools is an educational cul-de-sac, creating life-long experiences that we have had to endure, and leading to violations across all of the articles of the UN Convention on the Rights of Persons with Disabilities, including article 24 [on inclusive education].”

They said that disabled children were being “let down by the education system”, with taxpayers’ money being funnelled into segregated school places “which only creates divisions and disconnect across human lives”.